Why Do I Need A Prenuptial Agreement? 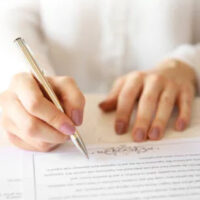 In the mind of most average people, a prenuptial agreement, also called a prenup, is only for those with significant assets.. In reality, depending on the situation you find yourself in before marriage, a prenup is often a good idea even for couples who may have fewer assets to distribute upon divorce. Each case is different, and every tool is worth investigating.

Protecting Separate Property. In Florida, a divorcing couple’s assets are distributed equitably, which means that they are apportioned according to the fairest possible outcome. If property is not specifically classified as separate (belonging to one spouse), it will be distributed to either you or your spouse, without regard to who might actually own or use it. Assets can be designated as separate property in a prenup, and unless you take affirmative steps to change that, the asset will remain yours (or your spouse’s).

Making Sure Previous Spouses & Children Are Provided For. A prenuptial agreement is a good option for those who are entering into their second or third marriage, because it gives one a place to ensure that former spouses and children of the first marriage are adequately provided for upon one’s passing. Including language in a prenuptial agreement cements any bequest you might like to make.

Manage Debt. Prenuptial agreements are often used by soon-to-be spouses to stipulate who should be responsible for certain debts – for example, one spouse might have student loan payments still to make, and a prenup can establish that their spouse does not owe any part of that debt.

Establish Spousal Support Payments (Or Lack Thereof). Some states allow future spouses to settle the issue of alimony in a prenuptial agreement, from “establishment, modification, and waiver” to “elimination.” This can be of help when one spouse makes much less than the other, or if one spouse has a greatly reduced earning capacity. This can also help to establish spousal support when a court may award more or less than is wanted.

Clarifying Ownership Of A Business. A professional practice, like a certified public accountant (CPA)’s office or a doctor’s office, is considered a marital asset if it has been kept up with marital funds. A prenup can be used to establish the practice as separate property, which will prevent it from being divided by the court in order to achieve an equitable distribution.

There are several reasons why a prenuptial agreement is a good idea, even for couples who do not have many assets between them. If you have questions or concerns about creating a prenuptial agreement, the Hollywood family attorneys at the Law Offices of Steven A. Mason can make all the difference in ensuring you and your soon-to-be spouse are well protected. Call our offices today at 954-963-5900 to set up a consultation.